I listened to the weather forecast, hoping for warmer temperatures, but the meteorologist predicted the frigid air mass would  remain over the Midwest for the next two days. It wasn’t just bitterly cold (a wind chill of -30 to -40° F), it was dangerously cold.  A temperature of -10° combined with a wind of 10 miles per hour produces a wind chill of -28°.  Frostbite can occur in 30 minutes in these conditions.

School was cancelled.  Church services and meetings were postponed. Any necessary outside work required wearing multiple layers: down coat, hat, scarf, insulated gloves and insulated pants on top of layers of socks, sweatshirts, and corduroy pants.

Arctic blasts can bring beauty, as well as danger.  During these days of extreme cold, I was able to see sun dogs at sunset and at dawn.  This optical phenomena forms as the light of the sun is refracted through hexagonal ice crystals in the atmosphere, creating bright spots (sometimes with rainbow colors), each arcing beside the sun. 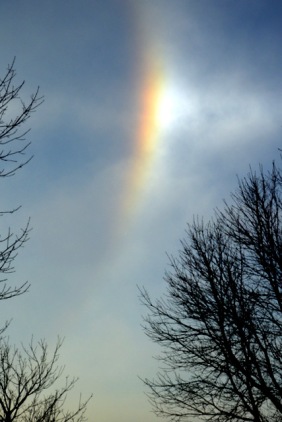 Sun dogs are also known as “mock suns,” but their scientific name is parhelia (one is a parhelion), which comes from Greek words para and helios meaning “beside” and “sun.”

Sun dogs always appear 22° on each side of the sun and at the same elevation as the sun.  The source of the term “sun dogs” is obscure.  Is it from a Scandinavian word resembling “dog” or from Norse or Native American mythology?  Is it simply because the bright spots follow the sun as a dog follows his master?  Dictionary.com merely says the origin is uncertain.

Along with many other bloggers, I wanted a single word from the Lord for the new year–one word to inspire me, to teach me, to challenge me. My word for 2015 is “close.”  As I contemplated what this word might mean for me, I was rereading a book in which  one of the characters refers to these verses in Acts:

Starting from scratch, he made the entire human race and made the earth hospitable, with plenty of time and space for living so we could seek after God, and not just grope around in the dark but actually find him. He doesn’t play hide-and-seek with us. He’s not remote; he’s near. We live and move in him, can’t get away from him! One of your poets said it well: ‘We’re the God-created.’

God did this so that they would seek him and perhaps reach out for him and find him, though he is not far from any one of us.  ‘For in him we live and move and have our being.’

I am a sun dog, existing only because of the light of the sun.

I want to follow God as closely as a dog follows its master.

I am a parhelion, distinct from God, yet wrapped up in His glory, always a mere 22° away.

I am para helios, close to the sun, a term that implies relationship.

My prayer for us all:  that we may learn what it is to be close to the Lord and how He is already close to us.