wind chill advisory of 20-30 degrees below zero, with blowing snow.

ice crystals kindled into rainbows by the setting sun.

Moses’ fiery encounter with God at the burning bush fills my thoughts. . . again and again.

There the angel of the Lord appeared to him in flames of fire from within a bush. Moses saw that though the bush was on fire it did not burn up. So Moses thought, “I will go over and see this strange sight—why the bush does not burn up.”

But I think it’s more than an unconscious desire for the warmth of a fire in the middle of bitter January weather.  I’m trying to follow the flaming thread woven in the tapestry of God’s love story, from Old to New Testament.

Moses learned of God’s holiness.  He was in awe.

“Do not come any closer,” God said. “Take off your sandals, for the place where you are standing is holy ground.”  Then he said, “I am the God of your father, the God of Abraham, the God of Isaac and the God of Jacob.” At this, Moses hid his face, because he was afraid to look at God.   Exodus 3:5,6   NIV

The children of Israel learned reverence.

Moses and Aaron entered the Tent of Meeting. When they came out they blessed the people and the Glory of God appeared to all the people. Fire blazed out from God and consumed the Whole-Burnt-Offering and the fat pieces on the Altar. When all the people saw it happen they cheered loudly and then fell down, bowing in reverence.  Leviticus 9:23,24

For the Lord your God is a consuming fire,   Deuteronomy 4:24   NIV

In the story of Elijah’s conflict with evil King Ahab, the people acknowledged God as supreme and powerful.

Immediately the fire of God fell and burned up the offering, the wood, the stones, the dirt, and even the water in the trench.

In the third chapter of Daniel we are brushed by another fire that doesn’t burn.  Although Daniel’s fellow exiles weren’t sure if they would be saved, they were confident that the Lord was able to rescue them from the king’s furnace.

Nebuchadnezzar then approached the opening of the blazing furnace and shouted, “Shadrach, Meshach and Abednego, servants of the Most High God, come out! Come here!”

So Shadrach, Meshach and Abednego came out of the fire, and the satraps, prefects, governors and royal advisers crowded around them. They saw that the fire had not harmed their bodies, nor was a hair of their heads singed; their robes were not scorched, and there was no smell of fire on them.

These three faithful men learned they were not alone in the furnace.

He [the King] said, “Look! I see four men walking around in the fire, unbound and unharmed, and the fourth looks like a son of the gods.   Daniel 3:25 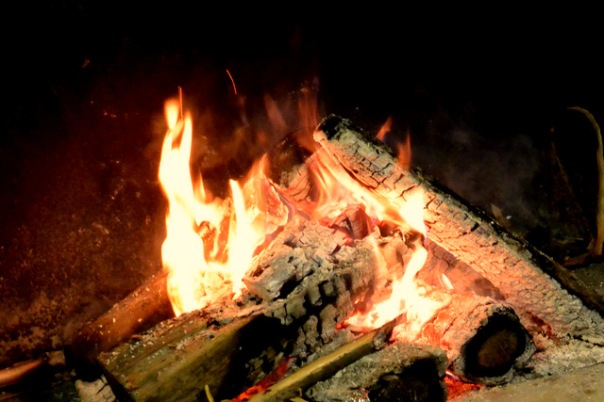 Paul took his understanding of the temple sacrifices and laid them onto the template of the New Covenant when he wrote of a radical new offering for worship:  ourselves.  We are living sacrifices–we don’t have to be burnt up like the offerings in the temple.

Therefore, I urge you, brothers and sisters, in view of God’s mercy, to offer your bodies as a living sacrifice, holy and pleasing to God—this is your true and proper worship.   Romans 12:1   NIV

What have I learned?

The bush blazes on holy ground.  I take off my shoes.

The furnace that was meant to destroy only ignites the ropes that bind me.

The fire of life burns hot, but I am not consumed.

I am not the ashes I deserve to be.

Because of the Lord’s great love we are not consumed, for his compassions never fail.   Lamentations 3:22   NIV 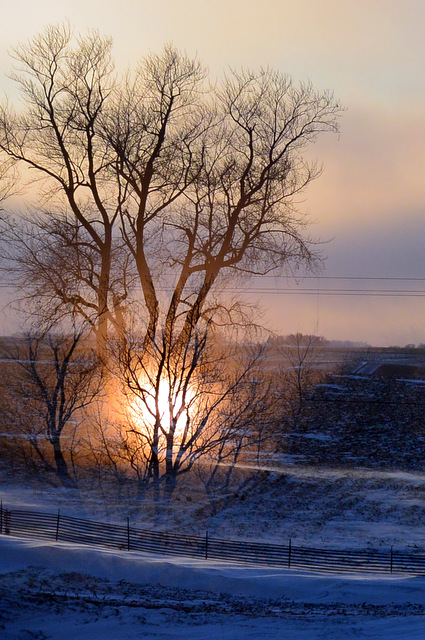 The voice from within the bush calls my name, and I answer, “Here I am.”

The sacrifice I offer in worship is myself,

and I walk into the flames willingly, because the fire is His great love.

photo #4 a happy, photographic “accident” that happened while writing this post

Cacti and the Burning Bush

My eighth grade English teacher explained the assignment:  choose and research a topic of interest to the class, then present the information in a speech.  I chose “Cacti of the American Southwest,” but my grade suffered due to my choice of subject.  I learned that most thirteen-year-old boys would much rather hear about Volkswagen Beetles than saguaro cacti and that many of the girls were more interested in make-up than the range of the Joshua tree.  Who knew?

Cacti may have been an odd-ball choice, but I thought they were interesting. My grandmothers had cacti among their houseplants, and I had enjoyed seeing their infrequent blooms.  My father’s mother kept a very tall variety, moving it from hot, summer sun to their cold basement in  winter, trying to replicate the conditions of its desert origins and bring it into bloom.

I also learned that my assumption that all deserts were hot and that all cacti lived in dry climates were incorrect.  In simplest terms, a desert is a place with less than 10 inches (25 centimeters) of precipitation per year, which includes Antarctica as well as the Sahara.  Deserts can be stark, wind-blown dunes or complex eco-systems with a variety of plants and animals. 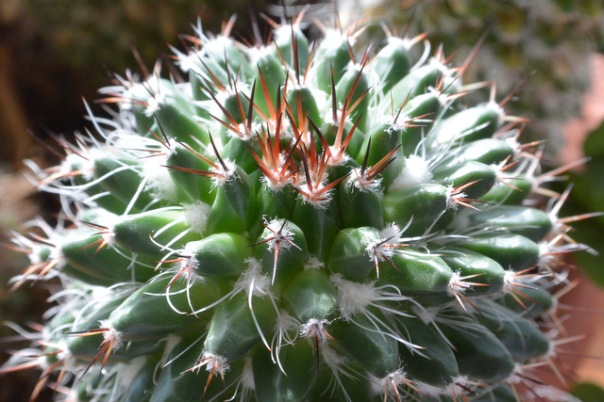 The word “desert” comes from a Latin verb that means “to abandon or forsake.”  Deserts (unless man has intervened by bringing in water and electricity) are landscapes where few live.  They are forsaken by people. 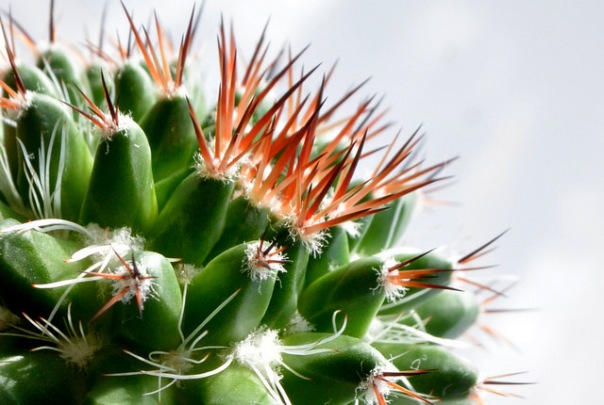 In our life as a Christian, sometimes we walk through green valleys, where we sense God’s presence everywhere.  However, there are times when we’re in a spiritual desert, feeling disconnected from God.  We slog through the sand dunes or are raked by cactus spines.  The few inches of rainfall seem insufficient.

We may feel God has abandoned or forsaken us.

You, God, are my God, earnestly I seek you;
I thirst for you, my whole being longs for you,
in a dry and parched land where there is no water.

Don’t give up.  Have hope!  It might take a while to hike to the other side of the desert.

Be strong and courageous. Do not be afraid or terrified . . . , for the Lord your God goes with you; he will never leave you nor forsake you.   Deuteronomy 31:6   NIV

As we walk, we have choices to make.

In the desert the whole community grumbled against Moses and Aaron.   Exodus 16:2   NIV

or we can be patient, expectant, and after years of “tending sheep” . . . be amazed.

After forty years had passed, an angel appeared to Moses in the flames of a burning bush in the desert near Mount Sinai.   When he saw this, he was amazed at the sight. As he went over to get a closer look, he heard the Lord say: ‘I am the God of your fathers, the God of Abraham, Isaac and Jacob.’   Acts 7:30,31   NIV 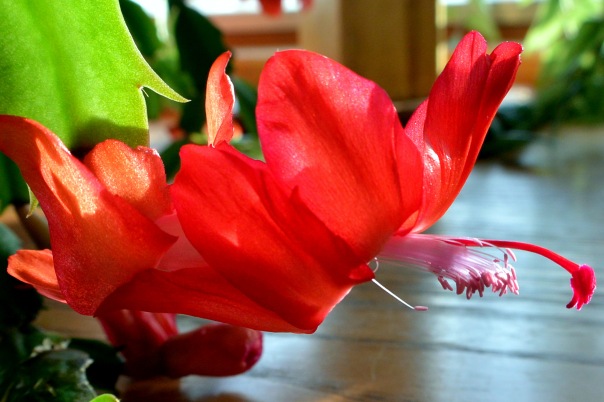 Sometimes we need to be in a dry place that will encourage buds to set (like my Thanksgiving cactus).  The places God leads us, they prepare us.

Sometimes we need a little time in the cold, dark basement to begin the blooming process.  The times that are difficult, they strengthen us.

It’s worth the wait, though, worth the desert walk to see a burning bush.

Take off your shoes.  Shake out the sand.  You’re on holy ground.